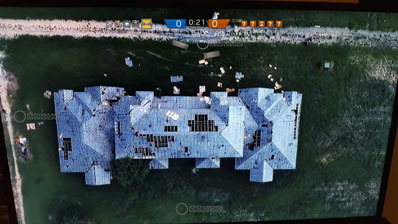 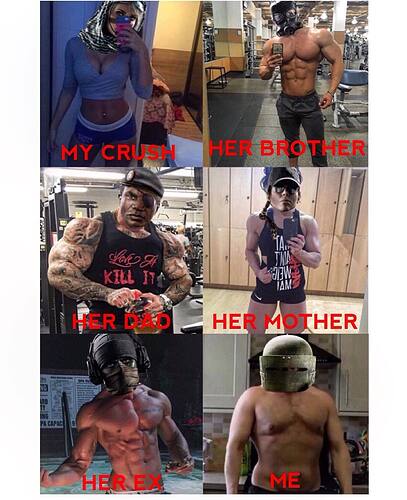 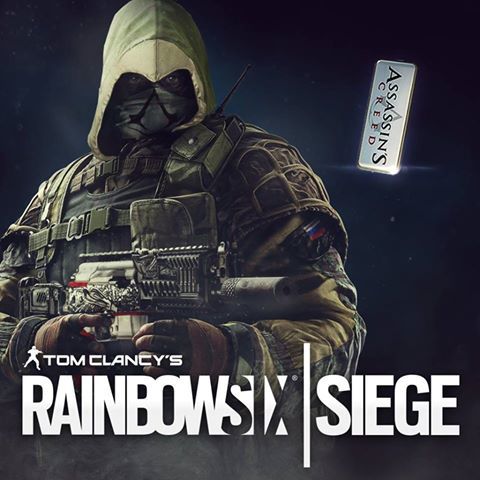 ##Pulse Rebalancing
Reduced range for Pulse’s gadget, and he can no longer quick swap out of his gadget.
The previous update that we did on Pulse’s Heartbeat Sensor not only made it more comfortable to use, but it also made him stronger since the frequency of the heartbeat detection updates became higher. Combined with the fact that it was possible to switch extremely fast from the Heartbeat Sensor to the main gun, this made him too strong – our gameplay stats and the community feedback made that very clear. As a consequence, we have opted to tweak him as follows:

##Semi-Auto Shotgun Balancing
Semi-automatic shotguns will be getting a few tweaks to make them less powerful at longer range.
Based on the data we collected and feedback from the community and Pro League players, we have opted to balance semi-automatic shotguns. Patch 4.1 will be introducing these changes:

Our intention is to make semi-automatic shotguns carry out incredible damage at short range, but lessen their impact significantly from medium to long range. The damage falloff from the original damage output will now be more noticeable. At longer ranges, the accuracy of the shots will also be harder to predict with precision, as players will have less gradually less control the further away they are from their target.
The shotguns that will be affected are the following:

A more precise breakdown of the aforementioned changes can be found in the table below.

*Please note that these damage numbers are per pellet. There are 8 pellets per shot.

##Gameplay Fixes
Fixed – Shield Operators movement speed is slower than intended. [They are now back to Season 2 speeds]
Fixed – When the middle beam of a trap door is destroyed, it can no longer be reinforced.
Fixed – When a player falls while rappelling and then climbs a ladder, they will float in the air.
Fixed – Some users found an exploit that would allow them to see through walls.
Fixed – Some Pistols have double the intended amount of recoil when fired while ADS and then switching to hip fire.
Fixed – If two Defenders are outside and one of them goes back inside, the “You are detected” message will disappear.
Fixed – The angled grip is not providing the proper benefit.
Fixed – A destructible wall can become invulnerable if the Attacker is killed while detonating a second Breaching Charge.
Fixed – Players are able to shoot through barricades without causing damage to the barricade.
Fixed – Enemy names can be seen through barricades.
Fixed – A model error occurs behind players that equip a Nitro Cell.

##Operator Fixes
All Operators
Fixed – Missing customization menu for PBR92.
Fixed – If an Operator mounts Tachanka’s LMG with a Pistol out, their arms will be near their chest after dismounting.
Fixed – Attackers are not killed when triggering Kapkan’s EDD and Frost’s Welcome Mat at the same time.

Blitz
Fixed – Operators have a broken animation when viewing from 3rd person.
Fixed – Legs, arms, and the top of Blitz’s head are exposed when triggering his gadget.

Twitch
Fixed – After an Operator is killed by Twitch’s Shock Drone, they are able to see the drone highlighted while in support mode.
Fixed – Shock Drone is no longer available after being revived from a DBNO state and picking up your Shock Drone.

Kapkan
Fixed – EDD will sometimes not destroy a barricaded door.

Sledge
Fixed – Enemy players are not killed when Sledge breaches a wall they are standing next to with his Sledgehammer.

Frost
Fixed – Welcome Mat texture is floating if it’s placed on a trap door and an attacker gets caught in it.

Valkyrie
Fixed – Black Eye Cameras pass through the frame of any window with aluminum shutters.

##Level Design Fixes
All Maps
Fixed – Players are able to place Breaching Charges, Cluster Charges, and other gadgets placed on the edge of a reinforced floor hatch.

Border
Fixed – One spawn location is not localized in some languages, and appears in English.

Club House
Fixed – It is possible to vault on the Library Cabinet in Bar.
Fixed – Severe rubberbanding occurs when a user walks near the hostage in “B Church”.
Fixed – Biker’s flag falls down when the wall between 1F Bar and 1F Central Hallway is reinforced.

Chalet
Fixed – Sticky Gadgets do not collide with walls in lobby near Dining Room 1F as intended.

Favela
Fixed – Operators clip through the ceiling after a vault action over the wardrobe.
Fixed – Operator shields remain present in the air after dying when switching floors in the Caster Cam.
Fixed – Valkyrie’s Black Eye Cameras float when a wall object is destroyed.
Fixed – Attackers are vulnerable to being spawn killed at EXT Rooftops.

House
Fixed – When clipping through the map with a drone, players are able to see the entire map.

Yacht
Fixed – The user can shoot through a small gap in-between the unbreakable walls from 3F Poker Room, and 3F Casino.
Fixed – Players are able to vault over an engine in 1F Engine Room and shoot outside.

##Game Mode Fixes
Custom Match
Fixed – Tactical Realism is not properly localized in Japanese.
Fixed – Game crashes on Xbox One when completing a Hostage Rescue match alone.
Fixed – Kapkan does not receive points for any actions related to his EDD.

Hostage
Fixed – “Prevent Revive” appears for both teams if the Attacker is disconnected while rappelling with the hostage.

Bomb
Fixed – Invisible collision is present when throwing a Black Eye or Nitro Cell at inactive Biohazard container spawns.
Fixed – On Bank, the B Lockers Bomb Zone does not cover the entire room.

##Player Experience Fixes
General Fixes
Fixed – Several game crashes were occurring more frequently since Season 3.
Fixed – Some users receive error code [0-0x00001001] during Step 3 of matchmaking.
Fixed – BattlEye service does not automatically start upon the first launch for Steam users.
Fixed – Missing a blending animation when vaulting over an object while ADS.
Fixed – When holding the SMG-11 or FMG-9 next to a wall, Operator’s arms would overlap inside of their body.
Fixed – Slow-motion replay of victims always show a glitchy entity position when an Operator enters a ragdoll state and fall to the ground.
Fixed – Players killed while in a DBNO state will sometimes have their bodies flipped 180°.
Fixed – Some weapon skins are not properly applied to the Para-308.
Fixed – Capitao’s Iron Mask headgear is not unlocking after purchasing.
Fixed – Several charms either appear offset, or do not appear on weapons or shields when viewed from 3rd person.
Fixed – Delay in the receipt of weapon charms after completing some challenges.
Fixed – Coffee cup charm has no collision with several weapons.
Fixed – Assassin’s Creed charm is offset.
Fixed – Attacker/Defender Chibi charm bundle is missing from the shop.

UI Fixes
Fixed – The MVP screen is zoomed in if the player that lands the final kill is ADS.
Fixed – Win/Loss and Kill/Death ratio is not displayed in the main menu.
Fixed – Vertical grip attachment text overlaps with its icon in some languages.
Fixed – Remaining matches for Season Rank Placement does not update in real time.
Fixed – The text describing the game mode overlaps with the user icons in some languages.
Fixed – In Spanish, Czech, Russian, and Latin American clients, the Switch View button overlaps Rotate.
Fixed – Debug text can be noticed while trying to pick up Deployable Shield or Barricade a window.
Fixed – Message displaying “Hold [Interact_button] To Drop the Defuser”.
Fixed – A persistent arrow remains next to the Operator Icon after being revived from a DBNO state.
Fixed – Navigation icons with D-Pad from the scoreboards are confusing.
Fixed – HUD elements remain above an Operator’s head while they are being interrogated by Caveira.
Fixed – When switching players while spectating, Caveira switches from Stealth to a normal stance.

Menu Fixes
Fixed – Inconsistencies between the formatting of the text for certain bundles.
Fixed – Union Jack bundle and Engraved bundle have the same name.
Fixed – The Capacity of the SASG-12 Shotgun is listed as 8.
Fixed – Uplay opens in full screen when attempting to redeem a locked Reward.
Fixed – Ops Icon Charm Bundle does not fit the text area in Japanese.
Fixed – Circle button is shown instead of Right Thumbstick on all tool tips in Japanese.
Fixed – Secondary weapons have a slot for charms in the loadout customization menu.
Fixed – There is no background music on the Operator selection menu, or on the main menu.
Fixed – System notification isn’t shown when creating or accepting an invitation to a local game lobby while Multiplayer privilege is set to Blocked.
Fixed – User remains in infinite loading upon switching profiles.
Fixed – The R6 Credits Expired pop up is displayed after every log in.
Fixed – Club Challenges overlay is missing on the Russian client. 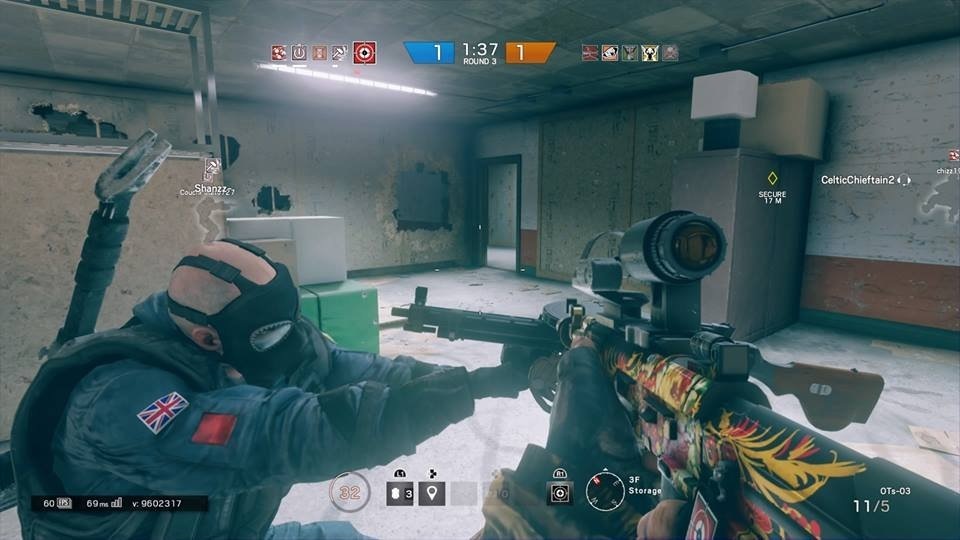 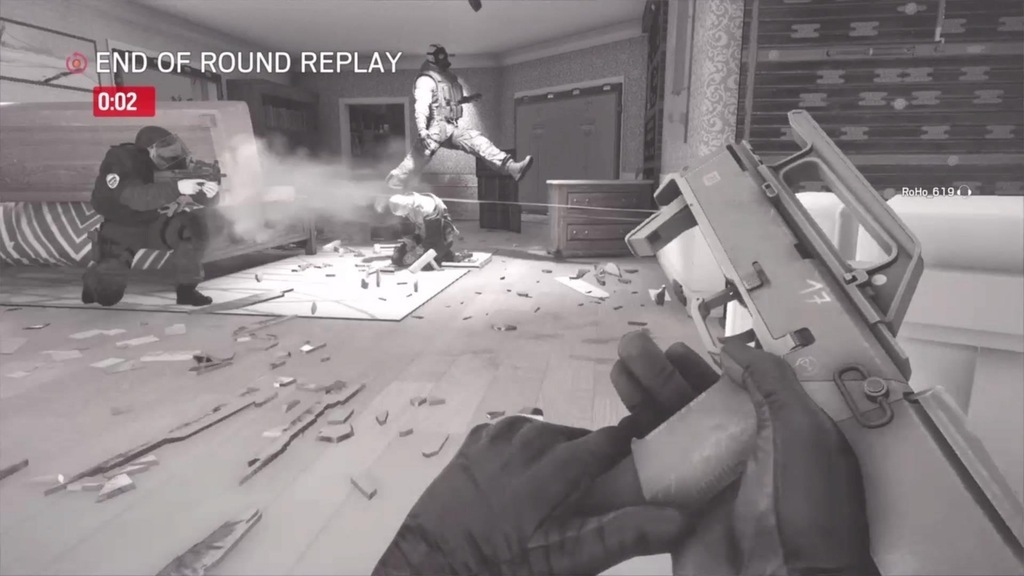 The tactical, tough team-based shooter Rainbow Six Siege has picked up a lot of traction in the past six months. That’s been possible thanks to the release of new maps, new character releases, updates and bug fixes, turning one of Ubisoft’s more...